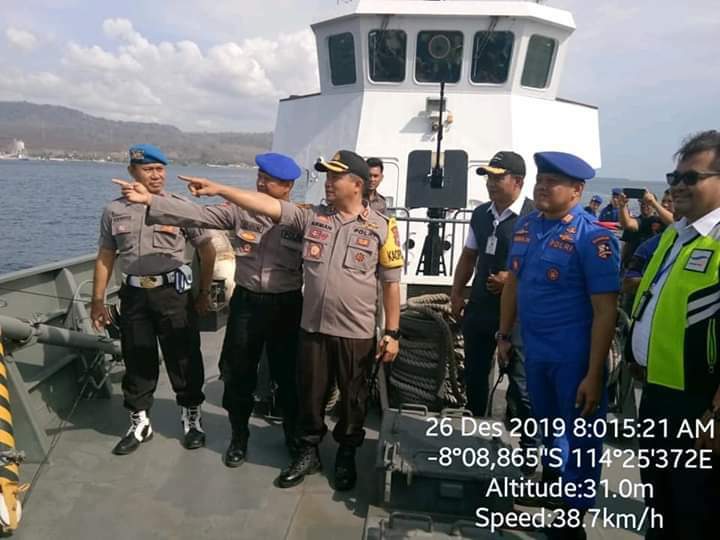 BantenNet.com, KAMPUNG KUTILANG - 5005 Ditpolair Korpolairud who are members of the 2019 Candle Operations carried out joint patrols in the Banyuwangi Strait waters together with elements from the Commander of Lanal Banyuwangi, Banyuwangi Police Chief, Dandim Banyuwangi, Pelindo, ASDP, and Basarnas. Joint joint patrols are carried out to ensure the smooth, order and safety of homecoming and Christmas holidays, especially from and to the island of Bali. Thursday, (12/26-2019)

"Today we are carrying out a joint patrol of several elements and the Satker, together we are monitoring directly the situation of the Banyuwangi Strait Waters to Bali Waters. We know that the mudik and return flow and the Christmas and New Year holidays (Nataru 2020) peak occurred today, "the AKP said. Rusman, S.H., M.M. KP Commander. I told you.

Before departing to carry out joint patrols, all elements must first finalize the plan while monitoring the homecoming flow at the Ketapang - Gilimanuk crossing port and reviewing the PAM OPS LILIN 2019 Post.

The joint joint patrol activity lasted for almost 6 hours and obtained a picture of the situation of safe, orderly and smooth waters during the peak of the homecoming season and the holiday of Christmas and ahead of the New Year.

In a separate place, Dirpolair Korpolairud Brigjen Pol. Drs. Makhruzi Rahman, S.IK., M.H. said that to create order, fluency and security in order to create a sense of security and comfort in various community activities, especially Christmas and New Year's Day, of course it cannot be done by only one institution.

"All existing maritime stakeholders must work together to establish synergy and support each other, so we all certainly hope that the vision and mission of each institution can be realized", he explained.

Furthermore Brigadier General Makhruzi said that in the framework of the 2019 Candle Operation, Ditpolair Korpolairud had deployed as many as 5 units of patrol vessels as Operational elements which were placed in several dense points of passenger ship shipping, including Lampung, Banten, DKI Jakarta, Semarang (Central Java) and East Java Waters . In addition, in order to anticipate and deal with Kamtibmas disruptions, Ditpolair Korpolairud has also deployed 32 units of its patrol boat fleet and spread BKO duties in almost all Polda in Indonesia.

Secure the Bali Strait at the Nataru Celebration 2020, Joint Sea Elements Carry Out Security Patrol (26/12) - Not only on land, the Nataru 2020 security patrol is also carried out at sea, namely at the Bali Strait, the sea element incorporated in the 2019 Candle Operation consists from KRI Tombak-629, KP Kutilang and KAL Tabuan and Sea Rider owned by Basarnas.

Commander of the Navy Base (Danlanal) Banyuwangi, Lantamal V, Koarmada II Marine Lieutenant Colonel (P) Yulius Azz Zaenal, SH, M.Tr. Hanla., MM, asserted that the implementation of marine patrols held in the Bali Strait together with combined marine elements aimed at synergize all the potential security that exists in order to provide a sense of security, comfort and peace for Banyuwangi residents. "Lanal Banyuwangi always supports in order to maintain maritime security in synergy with Banyuwangi Regional Police, East Java Regional Police and Basarnas and related institutions in order to maintain a conducive situation in Banyuwangi". Said Danlanal Banyuwangi.

In his statement the Chief of the Banyuwangi Police said, that the Police as a security officer and law enforcement always anticipate and overcome security threats early on with relevant agencies and stakeholders by always patrolling together to create Banyuwangi always conducive.

Starting with the coffee morning event at KRI Tombak-629, on that occasion the KRI Commander of Tombak-629 Marine Lt. Col. Adam Cahya also said that the presence of KRI Tombak-629 was at the request of Danlanal Banyuwangi to strengthen the security of Nataru 2020 in the Bali Strait in addition at the same time with Bekul (Bekal Birthday) activities at Tanjung Wangi port